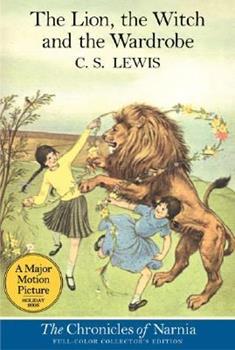 The Lion, the Witch and the Wardrobe: Full...

(Book #1 in the The Chronicles of Narnia Publication Order Series)

Don't miss one of America's top 100 most-loved novels, selected by PBS's The Great American Read. A full-color paperback edition of The Lion, the Witch and the Wardrobe , book two in the classic fantasy series The Chronicles of Narnia . This edition is complete with full-color cover and interior art by the original illustrator, Pauline Baynes. Four adventurous siblings--Peter, Susan, Edmund, and Lucy Pevensie--step through a wardrobe door and into...

Published by Wilma Jacob , 2 months ago
I had doubts because I was scared of being defrauded again online, but HACK MAVENS changed my perspective and gave me reasons to own a home. They did a very superb job in fixing my credit. They had my bankruptcy cleared and my score boosted from 525 to 788 excellent score across the three major bureaus. I strongly recommend HACK MAVENS to you reading this. One thing I like so much is that, they were able to achieve it all within 5 days. Don’t hesitate to contact them via; HACKMAVENS (AT) GMAIL DOT COM / +1 (714) 312 – 6740. They are second to none!

This was my last order

Published by Pissed Off Momma , 4 months ago
I haven't even opened the book but I'm already disgusted. I paid over $4 for a book that has $1.95 imprinted on the the cover!! Was a total rip off. This isnt the 1st time I've had to pay more for a book than the original price. Plus I'm afraid to even attempt to open this antique thing to read it to my kids.

Not wht I was expecting

Published by Catherine Long , 10 months ago
Wht i got was a picture book version not the original.

Never received…and didn’t realize until the next Christmas shopping.

Published by Sky-Vi-mom , 11 months ago
Looking for Xmas gifts, I ran across this book and was considering ordering. Then I reviewed my past purchases. I bought this book last year but never received it. No idea if it was good.

Published by Deb , 1 year ago
This book came in great condition! However, I thought I was receiving a different cover, which was partly my fault for not looking at the ISBN. Overall, still a good experience!

Not the Right Book

Published by Lanita , 1 year ago
The book in my order said it was the first book in the series. Instead, I was sent the play version of the book.

The Lion, the witch and the Wardrobe is so good !

Published by Darlenis , 1 year ago
When I first got the book the cover was very different from what I expected. Overall the book is in very good condition.

Rawrrr. The Lion is coming.

Published by Thriftbooks.com User , 16 years ago
Im reading The Lion the Witch and the Wardrobe. they are adventtures young adults. they take risks that no other kid would take. But this risk was a risk they would never forget. I loved this book. Its a very interesting seat jumping book. The characters of the book are... Lucy, Susan, Edmund, Peter.

Published by Thriftbooks.com User , 16 years ago
My three year old daughter is captivated by this intriguing and beautifully illustrated rendition of The Lion, the Witch, and the Wardrobe. This book has sparked her imagination beyond words! She talks about the "white witch" during the day, and the poor Mr. Tumnus turned to stone, and is enchanted by every page of this book. We read it every night, every single word. I do not find the text broken up and difficult to follow. The pauses that occur from one page to another allow discussion of the book and create eager anticipation! It has also sparked conversation about God. I really can't say enough good things and encourage all readers to delight in this fantastic fantasy.

Published by Thriftbooks.com User , 16 years ago
One of the miracles of C.S. Lewis is that he is able to incorporate a sense of the mystical and magical with the form of the world in a Christian framework without either aspect becoming forced or stilted. The stories that Lewis has crafted in the Chronicles of Narnia stand on their own as good storytelling even without the underpinning of Christian imagery - they are strong tales, kin in many ways to the Lord of the Rings cycle, which makes sense, given the friendship and professional relationship of Lewis with Tolkein. This particular text, 'The Lion, the Witch and the Wardrobe', is the second installment in the overall Narnia series, but each story is able to stand on its own. This is a story that almost begins with 'once upon a time...' It is a good story for children of all ages (including 40-year-old children like me). The story begins in the dark days of the London blitz, with the children being sent away for their protection. This was common for people in all social classes, from the royal family on down, to send the children out to the countryside for the duration of the war - when Lewis was writing and publishing the Narnia books, this experience would have been fresh in the minds of the readers. Peter, Susan, Edmund and Lucy are the family children sent to stay with old Professor and his less-than-amiable housekeeper; it comes as no surprise that the children hope to escape from this as much as from the bombs in London, and escape they did. Lucy found it first - the portal to Narnia, in the back of the wardrobe in the special room. Then Edmund (though he would lie about it), and then all four make the journey into Narnia, where they discover themselves to be the likely heirs of a prophetic chain of events freeing the land from the evil of the wintery White Witch, who was then styling herself as the Queen of Narnia. In fact, the real king of Narnia was Aslan, a majestic lion full of power and grace, whose soul was as pure as any child's hope for the future. The Christian images would seem familiar to any liturgical churchgoer, but the there are also other symbols that fit beyond the religious that tap into deeper longings - evil here is not a hot place, but a frozen place, where the emotions are cold and sharp. The lesser creatures are the virtuous ones, and the children lead the way to the redemption of all. The battle of good and evil takes place in epic form, fitting many forms of heroic tales. The lion Aslan stands for the Christ figure, but can also conjure images of the lion of England - Peter's shield with a red lion makes him both the stand-in for the first of the apostles as well as a perfect casting for St. George. Other parallels abound. The children themselves live a good life in Narnia, but eventually return to their English countryside encampment, with spirits and hopefulness renewed. This is a tale of extraordinary power, and one that stays with the reader for a long time. Long before Harry Potter, there was Nar

Published by Thriftbooks.com User , 17 years ago
C.S. Lewis pioneered a new kind of fantasy when he wrote "The Lion, The Witch and the Wardrobe" -- the kind where people from our world somehow get swept into another one. It's old stuff now, but Lewis was among the first to attempt such a thing. Because of its originality, and despite some rather hamhanded allegory, it remains a charmingly written, classic story. To avoid the threat of bombings in London, the four Pevensie kids are sent to stay with a wealthy, eccentric professor in the country. But strange things start to happen when Lucy finds a wardrobe during a game of hide-and-seek -- when she climbs in, she finds a snowy woodland and a friendly faun. Her siblings don't believe her... until peevish Edmund also ventures through, and encounters the beautiful but evil White Witch. Soon all four are wandering through the snowy land of Narnia, encountering mythical creatures and talking animals. They also find that the four of them are at the center of a prophecy that will lead to the return of lion-messiah Aslan, and the downfall of the White Witch. But things don't go according to plan when Edmund defects to the Witch's side... How many fantasy stories are written about kids who crawl through a hedge, wander through a door or pick up a magical object, and immediately are swept off into a medieval land? Lots. And they owe a debt of gratitude to C.S. Lewis, theologian, author, and drinking buddy of "Lord of the Rings" author J.R.R. Tolkien. C.S. Lewis' story is, despite being set during World War II, very 19th-century in tone -- very charming, conversational and full of little details. He populates it with a mishmash of mythic creatures such as dryads, fauns, and talking beavers. The one flaw? Lewis gets quite hamhanded with his Christian allegory, such as Aslan's resurrection. However, he has a very good plot and charming characters to balance it out. Those characters deftly avoid being cutesy, especially by virtue of the malicious Edmund, who slowly has a change of heart after falling in with the evil Witch. He's a much more enjoyable character than his noble brother Peter, just because he's so real. And as a counterbalance, there's Lewis's sweet-natured Lucy -- which was also the name of Lewis' granddaughter. Complex characters and still-fresh stories give "The Lion the Witch and the Wardrobe" -- which is soon to be released as a major movie -- a special ambience. Definitely worth reading.
Write a review

The Lion, the Witch and the Wardrobe Mentions in Our Blog

Raising Lifelong Readers
Published by Amanda Cleveland
2 months ago
ThriftBooks enlisted OnePoll to survey 2,000 parents of school-aged children about their kids' reading habits and personal libraries, and we found some page-turning stats. Here are some of our favorite findings.
Read Article

Ireland is no stranger to being home to literary legends, which may partly explain why it's referred to as "The Land of Saints and Scholars." With St. Patrick's Day quickly approaching, what better time to honor these literary legends and highlight some of the best Irish authors?

Family Book Club: The Chronicles of Narnia - The Lion, The Witch, and The Wardrobe
Published by The ThriftBooks Book Club
10 months ago

As you and your family delve into The Magician's Nephew, you might look ahead and start making plans for the next family book club entry in The Chronicles of Narnia series.

Family Book Club: The Chronicles of Narnia — The Magician's Nephew
Published by The ThriftBooks Book Club
11 months ago

What’s better than bringing your family together to engage in a book that everyone in the family can enjoy? This month we recommend The Chronicles of Narnia: The Magician's Nephew, and have put together discussion questions to help get the family talking.

ThriftBooks and Libraries
Published by The Library Team
2 years ago

Have you ever wondered why you might want to get a copy of a book marked as being "Ex-library?" Our Library Team explains here why sometimes that is the best choice, and how your local library could benefit from it.