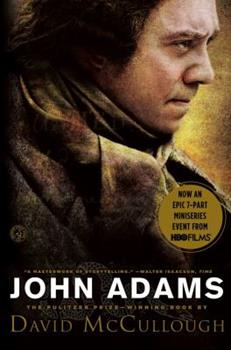 In this powerful, epic biography, David McCullough unfolds the adventurous life journey of John Adams, the brilliant, fiercely independent, often irascible, always honest Yankee patriot who spared nothing in his zeal for the American Revolution; who rose to become the second president of the United States and saved the country from blundering into an unnecessary war; who was learned beyond all but a few and regarded by some as "out of his senses";...

Unique biography but a fantastic read

Published by Austin , 1 year ago
McCullough has a unique style in his biography as it reads more like a story then a biography. This is likely made easier by John Adam's personal papers. I would highly recommend this as the leading biography for John Adams.

Published by LSmith , 2 years ago
The only reason I rate this particular copy as 1 star is due to the condition, not the context. I'm not sure what others consider Acceptable condition but a book filled with highlighted areas is not acceptable to me. This copy I received is distracted by all the pink and yellow highlighted phrases. I will definitely be looking for another copy. Not sure what I will do with this copy but I will not be keeping it or donating it.

Published by Thriftbooks.com User , 20 years ago
Father & left at that. Such an unfortunate phrase. He was so much more & may finally getting his due. I wouldn't have believed David McCullough could top his Truman. But he did. The book doesn't strictly follow history. Very little on the American Revolution in America. But that's ok because Adams spent most of that time in Europe. Perhaps it was his most important time. Certainly more than his vice presidency because he had to shut up. As president his single term was in many respects a failure. How could anyone follow Washington. Nobody could & he knew it & Jefferson knew it also. He had the benefit of four years buffer that Adams provided. One of the two most important things he is responsible for is avoiding a war with France thereby foiling Hamilton's plan for empire in the southwest. The other good thing was the creation of the U.S. Navy. He had many enemies real & imagined. Maybe because he always told the truth & was very self-righteous about it. His most important advisor, the one who would never desert him or stop loving him was of course Abigail. McCullough dwells on her at some length as he traces the progress of Adams life & their many years of separation. We know all this & more because they wrote it all down & saved their letters to each other & others in & outside of the family. Adams kept a 50 years diary. Perhaps with an eye on history that would vindicate him. This is an epic work.

One of the Brothers

Published by Thriftbooks.com User , 21 years ago
"In the cold...New England winter, two men on horseback traveled the coast road below Boston, heading north. The temperature, according to records kept by Adams' former professor of science at Harvard, John Winthrop, was in the low twenties."One can almost hear the amiable yet dramatic tones of historian David McCullough, punctuated by paintings of New England blizzards and the sound of hoofbeats. (McCullough is a frequent narrator of documentaries, notably those of Ken Burns.) McCullough's familiar cadence resounds through this extremely well written best-seller. The details never slow the reading or obscure the portrait; instead, source materials (much of it from the Adams' personal letters) illuminate and concretize his subject. McCullough writes clearly, forcefully, and with an ear for detail, humor, and anecdote. Overall this is a flattering portrait of Adams' longtime service as lawyer, revolutionary, writer and philosopher, diplomat, politician, and farmer. The book could well have been subtitled: "An Appreciation," both because Adams demonstrates so much to admire (including integrity, erudition, patriotism, work ethic, and courage) and because McCullough either doesn't criticize Adams or couches his disapproval by leaving some issues open. Some readers may suspect a positive bias. Criticized and embattled by Jefferson, Madison, and Hamilton--and by the libelous hyperbole of opposition newspapers and rivals--Adams takes on an almost martyr-like persona. To test McCullough's balance, one must read other books on both the Founders and the political culture of the times. Joseph Ellis' "Brothers of the Revolution," for example, is a more analytic, speculative, and impersonal book than "John Adams," and Ellis does not temporize on such issues as Jefferson's affair with Sally Hemmings. (McCullough: "for all the rumors . . . relatively little would ever be known." Ellis: "which was only confirmed beyond any reasonable doubt by DNA studies done in 1998 . . . "). Ellis engages in comparatively more "psychobiography" ("[Adams had] a congenital inability to separate his thoughts from his feelings about them"); McCullough resists theory, and relies more on the literal evidence of his source materials. Also, because it is a biography, we miss some history: Since Adams was an ambassador in Europe during the war, securing French naval assistance and Dutch money, there is little mention of the country's trials military victories in the latter years of the war. Hamilton's role in stabilizing the country through the Federalist papers and establishment of a central bank receive little attention. There is little question that Adams was, for the most part, the right man for the times, largely steering clear of both Republican and Federalist extremes. McCullough demonstrates that Adams was largely underappreciated by his contemporaries. More than Jefferson, Adams seems the man of the people, as well as the more flexible: Adams was an idealist when the times ca

Excellent biography of Adams the person

Published by Thriftbooks.com User , 21 years ago
The aspect of McCullough's biographies that I enjoy most is that McCullough seems to genuinely like the person he is writing about. John Adams is no exception in this regard. When we meet someone new, one of the first questions we ask (or are asked) is "What do you do for a living?" This is not surprising because most people base their identity off what they spend 40 or so hours a week doing. Furthermore, we base our initial opinions of others based on their jobs. When we become friends with a person, however, their career becomes secondary to (but not independant of) their personality and values. When I say that David McCullough treats John Adams as a friend, I mean that he focuses primarily on Adams' values, advice, examples of how he put his values into practice. Rather than get a lesson on the Declairation of Independence, McCullough tells the reader what John Adams role in the formation of the document was and how his values (anti-slavery sentiment for example)contribute to the result. And while Adams' career is discussed at length, the most enjoyable aspect of the book comes in the form of advice that John and his "dearest friend" and wife Abigail give to their children and to each other. In sum, McCullough gives us a well written biography about the life, career and wisdom/values of a man from New England named John Adams. I highly recommend this book; your opinion of the second president of the United States will be raised as a result and his practical advice will be appreciated.

Published by Thriftbooks.com User , 21 years ago
Its a given that whenever you see David McCullough's name on a book cover that the scholarship will be awesome and the writing will be brisk and entertaining. John Adams is exceptional in that McCullough has managed to outdo even his works on Harry Truman and Theodore Roosevelt, which takes some doing, believe me. The typical view of John Adams is that he was a dull, humorless failure of a President sandwiched between the two great success stories of George Washington and Thomas Jefferson. McCullough shows us Adams the wit, Adams the innovator, and Adamsthe truly good man. Furthermore, McCullough also lets us see the entire Adams family, especially Abigail, John's soul mate in every possible way; and his son John Quincy, a worthy heir to his giant of a father. As Revolutionary leader, Adams was one of the first to be determined that the colonies should be free from Britain and one of the strongest representatives the country had in France, Holland, and England. As President, Adams had the thankless job of balancing between the pro-British High Federalists and the pro-French Republicans so as to keep the USout of a war which he knew we could not afford. Neither vain nor charismatic, Adams met the all too common fate of those who merely do a good job without hogging the limelight: he was jeered, ignored, and pushed to one side while he still had many more years he could have served. Another fascinating aspect of Adams' life which McCullough covers brilliantly is his long friendship with Thomas Jefferson. The two men were quite different in style and manner, but were close friends for many years until political differences divided them. I was very happy to read McCullough's account of how the friendship was restored after both men were in retirement, and to know that they kept in contact with each other almost up to the day they both died, July 4, 1826.

Published by Thriftbooks.com User , 21 years ago
This book is an outstanding success on so many levels. The writing is most lyrical and beautiful...there is not one wasted word in the whole book. It's a book that is difficult to put down for the night. Perhaps the greatest success of the book is the correction of many John Adams stereotypes. In this book you meet a John Adams who is a delightful wit, a man deeply in love with his nation, and more-so with his wife. Mr. McCullough also gives Abigail Adams her due as a most delightful person and one of the most important women in our history. The love the couple shared is as deep a love as humans are possible of giving and receiving, and that love is radiated to you from the pages of this book.A warrning to Jefferson fanatics...during his research, I think McCullough, perhaps more than anybody else, gained a true understanding of Thomas Jefferson and has done the nearly impossible...portraying Jefferson as a human being. As a human being, Jefferson loses some of his shine. As a human being, john Adams shines even brighter.Mr. McCullough has done with John Adams what he did with Harry Truman a few years ago...he has restored the lustre of a truly great and underrated American. I hope that preparing this book gave Mr. McCullough as much pleasure as I had reading it.
Write a review

John Adams Mentions in Our Blog

The world lost a great historian when author David McCullough passed away on August 7. The Pulitzer Prize-winning author was also renowned as a narrator and television host. Read on for more about his life and work.