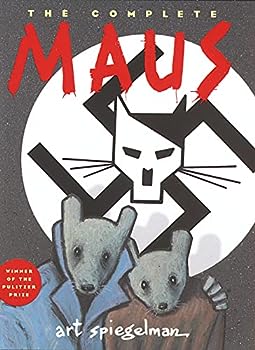 (Part of the Maus Series)

At last! Here is the definitive edition of the book acclaimed as "the most affecting and successful narrative ever done about the Holocaust" (Wall Street Journal) and "the first masterpiece in comic... This description may be from another edition of this product.

Would recommend for anyone - even nonreaders

Published by Lisa , 1 month ago
Great presentation, in comic form, of the tragedy commonly known as the holocaust, that everyone needs to know about. Know someone who reads comics but not books? Get this for them. Are you someone who reads constantly? Still get this. I admit I was in tears by the end.

I did not receive this item.

Published by Barbara G. , 7 months ago
I did not receive this item. The website says you've been waiting to fill my order because you were out of them. Why would you think I received it?
Published by Thriftbooks.com User , 3 years ago
I ordered this book, and the book itself was good. However, the book I received was in poor condition; it has pages missing and falling out.

Maus brought it all home

Published by Thriftbooks.com User , 18 years ago
Growing up Jewish, the Holocaust became an inevitable part of my identity. In school and in my brief religious education I've read book after book after book, seen documentary after documentary, explaining to me in gut-wrenching detail what happened to my ancestors at the hands of the Nazis. Sad to say, after so many accounts, so many black-and-white photos of skeletons and diary entries of anguished children, I felt like I'd seen it all. I thought there was nothing to surprise me about the Holocaust. Then, in seventh grade, my Hebrew school teacher handed me a box covered with cartoon pictures of cowering mice and towering cats. Inside were two slim red-backed books of cartoons. He said, "We're reading this in class. Go ahead and get a head start."I've read Maus I and II several times since then, and each time it surprises me with its understated power. It's an almost magical combination of words and images that coalesce into two--almost three--parallel stories: that of Vladek Spiegelman's survival and eventual liberation from Auschwitz, and his relationship with his beloved, slightly unstable wife Anja, who committed suicide after the war; and that of the progress of Vladek's relationship with his grown son Art, the author of these books. By recreating his parents' world, before and during the Holocaust, Art Spiegelman attempts to understand how those experiences shaped his father, and tries to come to terms with his own frustration in dealing with Vladek now, a stubborn, bitter, ultimately fragile old man.Spiegelman's cartoon images are brutal--not, for the most part, because they're horrifically graphic, but because the angular line drawings, the opaque shadows, and the humanoid animals lend a creepy surrealism to the stories. The Jews are mice; the Nazis, cats; the Poles, pigs; the French, frogs; the Americans, dogs...In one sequence, the cartoonist and his therapist appear as humans, wearing mouse masks, while stray dogs and cats wander the streets. Every once in a while, as a story ends, a series of drawings is punctuated by a dark, narrow sketch of Auschwitz's smoking chimneys. It's haunting.It's difficult to convey in words the scope and power of Spiegelman's depictions. For this jaded Jewish preteen, Maus finally brought home the impact of the Holocaust, not only the inhumanity and horror of death, but the lasting burdens carried by the survivors and their children.

More subtle than can be understood in a single reading

Published by Thriftbooks.com User , 19 years ago
These books are an easy and fast read, but by no means are they simple. In two slim comic books, Art Spiegelman chronicles his parents' movement from comfortable homes in Poland to the death camps of Auschwitz and Birkenau, and from there to a surreally banal afterlife in upstate New York. We watch the destruction of the Holocaust continue in Spiegelman's father's transformation from a bright, good-looking youth to a miserly neurotic, his mother's deterioration from a sensitive, sweet girl into a suicide, and in the author's own unhappy interactions with his parents. I have read some of the most negative reviews of these books, and I respectfully disagree. Some negative reviews ("Spiegelman is a jerk") castigate Spiegelman for his shamefully self-interested milking of his father's life and the Holocaust. Other negative reviews find fault with the unoriginality of the story, or discover historical inaccuracies, self-contradictions, or simplifications in the tale. Finally, a set of reviews are upset with Spiegelman's coding of people of different nationalities as animals(especially the Poles, who were also victimized by the Nazis but are depicted as pigs in the comics.) The first criticism is both deserved and unfair. Deserved, because Spiegelman profits by the pain and death of millions, including his own family. Unfair, because Spiegelman himself consciously provides the basis for our criticism that he mocked and neglected his elderly father at the same time that he fed his own success upon his father's tales. The two volumes echo with his regret and unexpiable guilt at his treatment of his parents, and at his own success and survival. To attack Spiegelman for these things is like scolding a man in the midst of his self-immolation. The second type of criticism finds _Maus_ to be sophomoric, inaccurate, or repetitive of other Holocaust survivor's experiences. The defense here is that Maus is the story of a single family, seen through the eyes of a single man (Vladek Spiegelman), and filtered again through his son. It is almost certain that the elderly Vladek forgot, exaggerated, or hid details, just as it is certain that his son summarized and misunderstood. However, the quasi-fictionalized format of the comic book throws this subjectivity into relief. The destroyed diaries of Spiegelman's mother are a reminder of the millions of life stories left untold, including stories perhaps too horrible and shameful for the survivors to reveal. _Maus_ does not claim to be an objective, authoritative history of the Holocaust, and in fact tries to emphasize its own limitations.While other works may better convey the Jewish experience in the Holocaust, the innovative format of _Maus_ justifies its existence, as it allows the story to reach a greater audience.Finally, many have objected to the negative stereotyping of the many peoples appearing in the book, especially the Poles. Spiegelman draws the Jews as innocent mice, but the Germans as bloodthirsty ca

Published by Thriftbooks.com User , 21 years ago
Art Spiegelman's "Maus: A Survivor's Tale" is a unique and unforgettable work of literature. This two-volume set of book-length comics (or "graphic novels," if you prefer) tells the story of the narrator, Artie, and his father Vladek, a Holocaust survivor. "Maus" is thus an important example of both Holocaust literature and of the graphic novel. The two volumes of "Maus" are subtitled "My Father Bleeds History" and "And Here My Troubles Began"; they should be read together to get the biggest impact.Artie is a comic book artist who is trying to create art that is meaningful, not just commercial. As the two volumes of "Maus" unfold, he gradually learns the full story of his father's history as a Jewish survivor of the World War II Holocaust. There is a complex "book within the book" motif, since the main character is actually writing the book that we are reading. This self-referentiality also allows Spiegelman to get in some satiric material.The distinguishing conceit of "Maus" involves depicting the books' humanoid characters as having animal heads. All the Jews have mice heads, the Germans are cats, the Americans dogs, etc. It is a visually provocative device, although not without problematic aspects. To his credit, Spiegelman addresses some of the ambiguities of this visual device in the course of the 2 volumes. For example, Artie's wife, a Frenchwoman who converted to Judaism, wonders what kind of animal head she should have in the comic."Maus" contains some stunning visual touches, as well as some truly painful and thought-provoking dialogue. Vladek is one of the most extraordinary characters in 20th century literature. As grim as the two books' subject matter is, there are some moments of humor and warmth. Overall, "Maus" is a profound reflection on family ties, history, memory, and the role of the artist in society.
Write a review

Maus. A Survivor's Tale Mentions in Our Blog

Celebrate "the freedom to read" during the ALA's Banned Books Week. This annual event is designed to draw attention to books that have faced bans and challenges in regional areas around the US. With these challenges on the rise, it's ever more important to stand against literary censorship.

What's your spirit animal? For National Wildlife Day, we thought we'd offer up some novels that feature wild animals as main characters. Some of these creatures are realistic and lifelike, while others offer a magical, mystical presence.