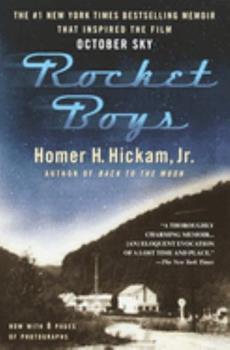 (Book #1 in the Coalwood Series)

The #1 New York Times bestselling memoir that inspired the film October Sky, Rocket Boys is a uniquely American memoir--a powerful, luminous story of coming of age at the dawn of the 1960s, of a mother's love and a father's fears, of a group of young men who dreamed of launching rockets into outer space . . . and who made those dreams come true. With the grace of a natural storyteller, NASA engineer Homer Hickam paints a warm, vivid portrait of the...

Science, history, and coming of age--all in a great book!

Published by Thriftbooks.com User , 19 years ago
If all Hickman had done was give us a portrait of life and growing up in an Appalacian coal mining town in the 50's, this would be a great book. But Hickman uses this setting as the foundation of a much larger story...the race to space, the revolution in America caused by Sputnick, and the opening of small towns accross America to the wider world with the advent of mass communications.Of course, at base, this is a typical coming of age teen story. During the course of the book, we watch as Hickman grows from a self centered kid into a teen with an accute awareness of the complexity, moral choices, and dangers of the world beyond the borders of his hometown--and of the dangers lurking right at home.But Homer Hickman is no ordinary teen. He dreams of space. He knows he is destined to build rockets--though he knows absolutely nothing of rocketry, and is failing algebra. Nonetheless, he perseveres. Using his own natrual smarts, his ability to talk his parents, other adults, and many of his friends into anything, and using his "political" connections shrewdly (his father is the mine manager), he overcomes all hurdles--technological and personal--to build a rocket that works.He doesn't stop there. Once he gets a rocket to fly, he wants to get one into orbit. It is this quest (reminiscent of so many other quest books form Don Quixote to Moby Dick) that forms the center piece of the narrative, and is the engine for opening his mind to the realities of the world beyond his coal mining town.Needless to say, since he wrote the book, he obviously escaped. The journey is inspiring. The writing inspired. The book is a must read for adults and teens alike.

Published by Thriftbooks.com User , 21 years ago
I get so depressed by some of the books on the market. Heavy themes, hidden meanings, verbose authors. October Sky is a get what you see book. It is simple but not too simple. It is an honest story about an honest guy growing up in West Virginia. His life is like ours. He has friends and enemies, successes and failures, girlfriends and conflicts.But his life is also a model for our time. Homer Hickam is a very special person and he has told the story of his life in this book. Mr. Hickam grew up modestly in a coal mining town. His love of rocketry, no his passion for rocketry pulls him out of an average community and propels him to success inspite of his family and surroundings.Few books appeal to adults and young adults alike. This is one. I want my wife to read it as well as my 13 year old son. Hickam is a mentor and I've never even met him. This is such down to earth honest writing it makes you smile.Read this wonderful story and you will have a hard time approaching your next mystery or drama. It is refeshing. I don't even want to see the movie after reading this book. I want the images I have to last not the ones Hollywood created.

Published by Thriftbooks.com User , 22 years ago
For those who loved the movie "October Sky", this book gives even more insight to the life of a teenage boy in Coalwood, West Virginia, in a time where the "outside world" was concerned with the Cold War and Dr. von Braun's team with "cashing up to the Russians in rocketry." The residents in Coalwood, however, were more concerned with what was below them rather than above, and with their dominant high school football team. 14-year-old Homer Hickam, Jr. (Sonny)is aware that only football stars (like his older brother Jim)ever get college scholarships, and the glory that he and his ragtag group of friends envy. It is common knowledge that the rest must work in or for the mine in the company-owned town. However, seeing Sputnik fly in 1957 and the attempts of Dr. von Braun's missiles, Sonny is inspired to launch his own rockets. With the support from his Mom, teacher, and friends (little from his father, the manager of the mines), Sonny, Roy Lee, and Sherman form the BCMA- Big Creek Missile Agency. They are later joined by Quentin and Billy, becoming widely known throughout Coalwood as the "Rocket Boys". They suffer through many mishaps during their teenage years, but manage to pull through. Sprinkled with humor, romance, and sadness, this book tells of a boy growing up trying to earn the approval of his father, his town, and ultimately himself. Many parts will make you laugh- Mom's constant warning not to "blow yourself up", Roy Lee's advice to Sonny about his love, Dorothy, and the Rocket Boy's experience getting moonshine for rocket fuel- and ending up drunk! Other parts will make a shiver run down your spine- how Sonny had to face his bitterness after the mine accident, and his arguments with his father. I got the same tingle reading the last chapter that I got from watching the movie- which is also wonderful. I would recommend this book to anyone who has ever fought hard to accomplish a dream. It is a truly inspiring memoir that will leave anyone with a feeling of happiness, sadness, and satisfaction all rolled into one. Read "Rocket Boys"- you won't forget it.

A Book deserving more than 5 stars

Published by Thriftbooks.com User , 22 years ago
The only reason I read this book was because I saw the movie and loved it. The book was so much better though and totally deserves more than 5 stars. I would highly recommend this book to anyone who saw the movie, and liked it, or maybe grew up in a coal-mining town and felt like reading this book. Take my word for it: it's great

Published by Thriftbooks.com User , 22 years ago
Homer Hickam's Rocket Boys was one of those books that I couldn't put down, and I thought about for a long time after I finished it. There is humor mixed in with the story of one boy's determination to succeed in achieving his goals. I would recommend this book to people who are looking for an inspiring story. It is about growing up in a rural mining town in West Virginia struggling to accomplish goals in space when the main concern of the town is what is below the ground, not what is above it. I thought that this was an excellent book and would recommend it to teenagers as well as adults. It's considered an adult book, but it is an easy book to read and teenagers can relate to the main character. This is one of my favorite books. Through reading this book, I have learned that hard work and determination will allow a person to reach his or her goals in life. In this book, Homer Hickam had many obstacles to overcome in order to reach his goal of becoming a rocket scientist. This book has taught me that if I have a dream, I must try to reach it. No matter how many and how hard the obstacles are that come in the way of dreams, a person must keep trying. I would also recommend seeing the movie that was based on this book, October Sky. October Sky is an accurate presentation of the story. If you have already seen the movie, you are sure to enjoy this book.
Write a review
Trustpilot