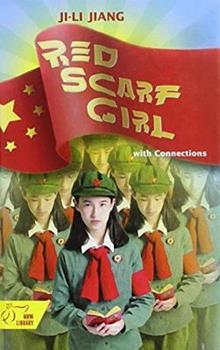 Publishers Weekly Best Book * ALA Best Book for Young Adults * ALA Notable Children's Book * ALA Booklist Editors' ChoiceIn the tradition of The Diary of Anne Frank and I Am Malala, this is the... This description may be from another edition of this product.

A must read book.

Published by Christine , 1 month ago
Ji-Li’s story is very fascinating.

Published by MissConviction , 11 months ago
Must read for every American!!!

Published by Ted , 1 year ago
Ji-li Jiang was a young girl in 1966 when Mao Zedong began what became known as the "Cultural Revolution" in Communist China. It was designed to rid China of the Four Olds and replace them with the Four News. In other words, to wipe out all vestiges of capitalism and class distinction in China and replace them with a pure, classless, Communist society. It was ruthless. The purge lasted about ten years and conservative estimates suggest the deaths/executions numbered in the hundreds of thousands while more liberal estimates range into the millions. The author of this memoir was in the upper grades and into junior high as she relates her experiences. She grew up to love Chairman Mao as a heroic, mythological savior of the people. But as she began to realize that her own ancestors were the type people that Mao hated - her grandfather was a landlord and therefore an exploiter of the working class - she, herself, became an object of ridicule and scorn and grew to hate her grandfather and even her last name. A bright, intelligent, studious child who excelled in her studies she was a favorite of her teachers (who were themselves victims of ridicule) and was told that she could rid herself of her black family status by publicly repudiating her own parents. Since this book was written and published later in life in the United States I don't think I would be revealing any spoilers not already assumed by the reader by stating that she finally refused to do so and eventually succeeded in leaving that country, although how she managed to do so is not explained. Other than witnessing a few beatings and hearing of a suicide of a relative, the author apparently never witnessed the true brutality of the "Cultural Revolution." If you are expecting to read about that aspect of this event, you will be disappointed. Otherwise, this is a somewhat unique glimpse into the life of a young schoolgirl in the brainwashing educational system of Mao Zedong's China. To that end, it might be worth the read.

My Opinion of Red Scarf Girl

Published by Thriftbooks.com User , 19 years ago
Red Scarf Girl was thought provoking and compelling book. The book is a memoir of one girl's experiences during the Chinese Cultural Revolution, a movement launched by the Communist government and its leader Chairman Mao, to purge China of people who did not follow the Communist ideals. At the start of the book the protagonist, a young girl named Ji-Li, is a Communist Party poster child. She believes in Chairman Mao and dreams of a career in the Chinese government. When she learns that her grandfather was a landlord (a group scorned by the government) she considers renouncing her family to follow the Communist party. While reading Red Scarf Girl I often felt annoyed at Ji-Li because of her blind faith in the Communist party despite the horror going on around her, and I was impatient for her to come to her senses. Even so, it must have taken great strength for Ji-Li to write what she felt at the time because she seriously contemplated leaving her family, almost changing her name so she wouldn't be associated with them. Events of the Cultural Revolution are not always pleasant to read, but the book was hard to put down. By the end of the story I had gained a greater understanding and appreciation for the people such as Ji-Li who had to make those impossible choices. I thought that Red Scarf Girl was engrossing and memorable and I highly recommend it.

Gripping Story and a must read

Published by Thriftbooks.com User , 20 years ago
I happened on this book in the children's section of a bookstore while on vacation and decided to read it. All I can is that everyone young and old should read it. Ji-Li tells a story that is both heartbreaking and tense with drama, but also one of courage and determination. If you take your present polictical freedoms for granted you need to read this. If you think that similiar situations could not take place in the USA, you need to read this book and think again. Great reading is not just for esacpe, this book will make you think.

Published by Thriftbooks.com User , 20 years ago
Ji-li Jiang, the writer and main character of the Red Scarf Girl, was a girl who grew up in China. The Cultural Revolution, started by Mao Ze-dong, began the year Ji-li turned 12 years old, in 1966. Her early life was joyful. Ji-li was respected because she was intelligent and she was trusted. However, soon she learns she is from a landlord family, which is one of China's Five Black Categories. Chairman Mao wanted all of China's Five Black Categories to be punished. This would include Ji-li Jiang. She then realized that some of her opportunities would have to be given up, like her not becoming a Red Successor or Red Guard because of her background. The Red Scarf Girl is a worthwhile read because it shows how Ji-li Jiang is a model hero. She is intelligent, mentally strong, and brave. Ji-li was intelligent and was at the top of her classes. Throughout the book, Ji-li was the smartest student, had perfect test scores, and she was given the biggest opportunities because of her academics. Ji-li helped other students in math because she was the best in the math class. This was one of the honors given to her because she was intelligent. In addition, her perfect tests reflected how she was so dedicated to her studies. Early in the book, Ji-li was given the opportunity to be a Liberation Army soldier because she was intelligent, physically strong, and flexible. However, Ji-li could not be a Liberation Army soldier because of her family background. Ji-li was given many chances to succeed because she was intelligent and she used her gifts to go beyond what her family history limited her to. When she could not be a Liberation Army soldier, Ji-li kept on studying hard because later in her life, she might be given that chance once more. Ji-li Jiang, in addition to being intelligent, was mentally strong throughout the Cultural Revolution. She went through many tough times, like when she went through reading a da-zi-bao about her and her teacher, Ke Cheng-li. During the Cultural Revolution, a da-zi-bao was a posted note that humiliated people by telling others what the accused person was charged with. The da-zi-bao was about how Ji-li Jiang was Ke Cheng-li's favorite student. During this time, Ji-li used her mental strength to get through her troubles. She did not take revenge upon the people who wrote this about her although she was the one who helped them through their questions and troubles in the classroom. During the Cultural Revolution, Ji-li Jiang remained brave, in addition to being intelligent and mentally strong. Later in the book, Ji-li Jiang, along with other classmates, went to work on the rice farms as summer labor. Everyone had to work either in the factories or on the rice farms. At first, Ji-li choose to work in the factories so she could look after her family. Her father was forced to work in labor because he had performed a counterrevolutionary crime, which he refused to confess. A counterrevolutionary crime is a cr

The Most Compelling Memoir in The World!

Published by Thriftbooks.com User , 22 years ago
First of all, I must say this book deserves ten stars, not five. Ji-Li Jiang tells the story of her life being completely torn apart by the Cultural Revolution and her own thoughts and beliefs on Chinese Communism. Ji-Li, a distinguished student, is condescended at school because of her family's past. She watches in terror as her favorite teachers are being harrassed at school, people's homes being ransacked, and her father being put in detention at his work building. Red Gaurds (enforcers of the Cultural Revolution) are everywhere, and they make sure that every well-to-do man, woman, child, is punished for being who they are. Insulting posters of propaganda turn up all over the city and Ji-Li's school. During all of the turmoil, Ji-Li is forced to choose between her family and the prestige and honor she has worked so hard for. Because of her family's political background, she loses the chance of getting into one of the best jounior high schools in China. Ji-Li begins to hate her ancestors for being who they were and she even begins to hate herself. She wishes that she were poor, so that she would not be ostracized for her way of living. However, despite all of her struggles, Ji-Li is determined to rise above those who stopped her from being who she wants to be. This is a wonderful book that I could not put down. Read this, and enjoy.

A Real Panorama of the Cultural Revolution

Published by Thriftbooks.com User , 22 years ago
Red Scarf Girl is an excellent book wrote by author Ji-Li Jiang, who grew up in Communist China, facing all of the downfalls of the political party, and ending up being criticized by everyone just because of her family's political background. Ji-Li explains all that went on in great detail, having no problems with backing up her details with more and more details, giving you the feel of actually being there during the Cultural Revolution.The book explains how harsh Communism was during the Cultural Revolution, and how so many people did everything and believed in everything that Chairman Mao did. Being in a rich family, she and the rest of her family were constantly criticized because of this and her 'bad' political background. She explains the characters in the book very well (her family members, Chairman Mao himself, her friends, etc.) and really lets you get to know their personality. You're almost inside of the book, watching as the Red Guards are practically terrorizing Ji-Li, seeing her friends turn their backs on her, and listening to the hateful words that the government says about people's families such as Ji-Li's.This is an excellent book, whether you know a lot about the Cultural Revolution or not. Ji-Li Jiang is really skilled in explaining what she sees, and will allow you to know what really went on with the Communist Party and the Cultural Revolution from the 1950s to the 1970s.
Write a review

Red Scarf Girl: A Memoir of the Cultural Revolution Mentions in Our Blog

Here at Thriftbooks, we take pride in being a resource to teachers. By offering great deals and discounts on used books, we help educators stock up on their most essential tools—books! Here are some tips and suggestions on how to create a robust classroom library.