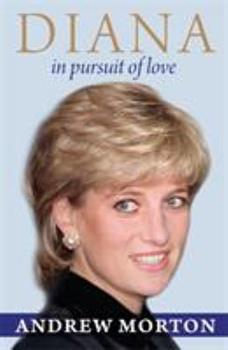 Diana: In Pursuit of Love

An updated edition of Andrew Morton's New York Times -bestselling biography of Diana When Andrew Morton's Diana: Her True Story was first published, it caused a media frenzy, severely jolted the royal family and the palace hierarchy, and shook the British establishment to its foundations. Later revealed as having been written with the Princess's full cooperation, this book is now widely regarded as her official biography. Yet it was not the full story,...

Published by Thriftbooks.com User , 17 years ago
I own and have read practically every book ever written about Princess Diana, including all of Andrew Morton's books about her. This one was well-researched and written, and he obviously cares a great deal about his subject matter. However, I feel that he strays from the title the overall intent of this book: Diana in Pursuit of LOVE. He re-hashes many old details, and therefore much of this book's content is superfluous and simply makes it TOO LONG WINDED. I knew all of those old details! It took me forever and a day to get through it, which is not usually the case. My other complaint is Morton's obviously personal vendetta towards Paul Burrell. I happened to love Burrell's book "A Royal Duty" and do completely believe his account on life with the princess. Morton obviously has a personal bone to pick with Burrell, yet Morton was the only one who chose to use his book to air their problems publicly. Otherwise, I'm glad that Morton is keeping Diana "alive" by writing about her; I just hope that his future novels, if any, are shorter and stick to the main subject.

Morton does it again

Published by Thriftbooks.com User , 17 years ago
Once again Andrew Morton provides readers with a highly personal look at a very human princess. From her temperamental faults to her unfulfilled hunger for affection, he gives a frank and accurate portrait of the world's most admired - and missed - woman. The world is a poorer place without Diana, and may she rest in peace. The fact that Diana herself never knew how very much she WAS loved is yet another tragedy of her untimely death

Published by Thriftbooks.com User , 18 years ago
I too came to this book with a deep sense of skepticism. Was it simply a re-hash to separate me from some $$? I'm glad to say that it's not the case at all. Morton brings his extraordinary insights into the totality of Diana's life and the ongoing influence on perception of the Royal family to write a book that is fresh and compelling. A real page-turner. I join those who think he has simply gone too far in his belittling of Burrell the Butler. It's an egregious problem with the book because it sounds like an ax to grind. For the time being, though, I think this is really the last word on the life, death and influence of Diana, Princess of Wales.

A superb, level-headed overview of Diana from 1991 onward

Published by Thriftbooks.com User , 18 years ago
Morton combines information from many sources to cover the period from 1991, including her secret collaboration with him on his earlier book, to her death in 1997 plus more recent events such as the Paul Burrell revelations. There is a pattern in the books by Wharfe, Burrell, Jephson (all of whom worked closely with her) and this book: All four authors strain to deny that Diana had mental health problems, yet they all portray her as incredibly insecure and emotionally volatile. Morton tells us that she would constantly phone her friends for consolation, as many as twenty(!) times a day in the case of one platonic male friend. Although Morton portrays her mental health as positively as he can, it's hard to avoid the conclusion that Diana was a black hole of emotional neediness. However, on the charge of Diana being paranoid, it seems like a classic case of "You're not paranoid - they really are out to get you." According to Morton, Diana worried about servants going through her mail (they were), servants taking strangers into her bedroom for a fee (they were), and the government tapping her phone lines (they were). Many people associated with Diana reported being followed or having their homes burgled in a way that suggested something other than ordinary criminal activity. An ongoing mystery surrounds the explicit phone conversation between Charles and Camila which was made public, where it appears that a government agency taped the call and then, much later, broadcast it on frequencies monitored by hobbyists. Morton discusses the alleged activities of British secret agencies, but important questions remain unanswered. For followers of the events surrounding Diana, this is a must-read, pulling together recent events and sorting rumor from fact, and in particular, offering a level-headed commentary on Paul Burrell.

Published by Thriftbooks.com User , 18 years ago
I have to say I was always in love with Diana, and followed her career and life very closely. I collected every magazine cover I could find during her courtship with Charles. I even got to see them once in person, from a distance of course.I bought Andrew Morton's first book on Diana when it first came out, just like I got this one. This is actually the fourth book on Diana Morton has done. This book continues some of the same information. Morton has included new material here, particularly since the last book was completed some time before Diana's tragic death in Paris. There aren't any earth shattering revelations here. There are different nuances, and people are naturally a little more free to say what they feel than they did while the Princess was still alive and had a future to consider, both for herself and for her boys. There are some rehashes of the allegations with Michael Fawcett, a few taped conversations that have been included that were considered too sensitive before, but by and large, this is another in a long line of books meant to continue the legacy of Diana as the woman wronged more than she was in the wrong, though there were faults on both sides.Morton is obviously sympathetic with Diana, and for those of us who still can't get enough of her, this book is a treat. For those who only need a little information, this is still an intriguing book. There were mysteries in Diana's life just as there is a mystery in her death, and Morton writes this in a suspenseful way, because even though we know the fate of Diana as a person, her image lives on and will continue to develop and be surrounded by mysteries, not just the fuzzy details of her death.
Write a review
Trustpilot