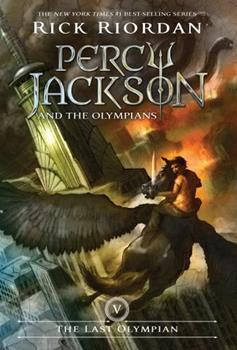 Published by Pookyway , 2 years ago
I ordered the entire series and one book came in the mail??

"Very Good Condition" for a hard cover book doesn't include the dust jacket.

Published by Thriftbooks.com User , 13 years ago
The Last Olympians was one of the best books i have ever read, the storyline was perfect I felt as if I was in the book but no one could see me or hear me but I could hear everything. At school I could not even put the book down. The way Rick Riordan wrote the book i felt as if I knew the charectars my whole life. The book also generated feeling I cried at the sad parts gasped at the surprising parts and laughed at the funny parts wherever the book's feeling went my feeling went with it. I loved the book so much I even wished I could be an amazing half-blood. I got this book for my birthday but I opened it before and the whole entire week I was itching to read it. I even told my friend to read it and she loves the series as much as I do. Personally I think Riordan should write another book. This was the biggest book of them all I never think I have ever read another interesting series. Rick Riordan makes sure everyone can relate to it and he thinks about the audience alot that is the most improtant thing an author can do. I have so much more to say but I can not. I hope you all enjoy the book!Thank you.

A fun read for kids and classical students!

Published by Thriftbooks.com User , 13 years ago
As a student of history with a love (and a minor!) in classics, and little kid at heart I loved this series of books, culminating in The Last Olympian--maybe the best in the series. The obvious comparison is to Harry Potter, but these books are really something different. They're a little lighter, and a little more fanciful, and just more 'colorful.' They are shorter and and just more fun with less dark overtones (imo.) This last story brings about a conclusion to the whole saga, with one battle after another, answers all your question and even gives our heroes the accolades they richly deserve. It seems its the last one in the series and thats a little sad.

Saving the Best for Last

Published by Thriftbooks.com User , 13 years ago
How many times have we seen series start out well, but go out not with a bang but a whimper? Not this series! It started off with a bang and ends with a bang. The Last Olympian is bigger and better. Like J. K. Rowling, Riordan took a whole book to wrap up his series well. If you read the fourth book, The Battle of the Labyrinth (Percy Jackson and the Olympians, Book 4), you know what happened to Kronos and what he wants--revenge and the destruction of Olympus. The final showdown is at hand. You will not be disappointed when it happens either. Riordan took his time to let it unfold, battle by battle. Percy Jackson, your favorite wise-cracking hero, still has that prophecy hanging over his head as his sixteenth birthday approaches. Some people just have to worry about driver's ed. Percy has to worry about the end of the world. In The Last Olympian, Percy faces good, bad, and heartbreaking choices and learns more than he ever wanted to learn about Luke and especially about himself and his destiny. How he learns about Luke reminded me of somewhat of how Harry learned about Voldemort's past. But quicker than you can say Stygian, war is upon him and the other half-bloods. Can they defeat Kronos and his army? If you're a fan of battles, you'll find plenty in this book and, as always, a plethora of monsters from Greek mythology. And there's Mrs. O'Leary. (Gotta love her.) And if you're keeping track of loose ends, you'll even find out the identity of the last Olympian and why that's important. Riordan always manages to walk the tightrope between humor and pathos. And what about Annabeth and Rachel? At least that saga is wrapped up satisfactorily. Some surprising and not so surprising heroes emerge as the prophecy is fulfilled. I'm sorry to see this series go, but I'm glad it ended well! This is definitely my favorite of the five. Mr. Riordan, please don't let this be the last Olympian book we read!

A worthy ending to a wonderful series...

Published by Thriftbooks.com User , 13 years ago
I must admit, when I first picked up the lightning theif in preperations for my vacation last summer, it was with a thought that I might be able to use it as a excuse to not have to take driving shifts as we drove steadily eastward to yellowstone. My family knows that if I am really in a book, nothing can pull me away from it. And so, as I desperately waited for my classes to get out, having bought The Last Olympian early that moment the doors opened at a local borders. I couldnt wait to start reading, having finished rereading book four during my lunch hour. And I was not disappointed. Riordan has a wonderful sense of humor with a snarky edge to it. Though I usually do not enjoy books written in first person, because most authors dont get just how dangerous writing first person can be, Rick has shown a nack for choosing his words carefully, showing up a world in vivid detail, and emotional clarity. The Last Olympian is a wonderful ending to a series that had much promise, and never broke it. To those who might be afraid I will spoil anything, I wont. I will only say this; Many twists and turns await you. In the final book of the Percy Jackson series, Rick Riordan has woven a tale, pulling all the threads together into a tapestry, with everything he had done before coming together in a epic, emotional ending... a ending that stirred my emotions in a way only one other writer, and concluding book had done, and that was Harry Potter and the Deathly Hallows by J. K. Rowling. While their story telling and writing styles are vastly different, what they share is a thirst for a good story, red herrings to throw you off, and a ending that you couldnt fully see coming, but cant help but be moved by in the end. I am saddened that this story has drawn to a end, but all good stories must reach their conclusions, otherwise they stop being good. But we can hope for Rick Riordan, for I have no doubt his gift from weaving a good story has not come to a close. I will continue to look forward to his future books.
Write a review
Trustpilot