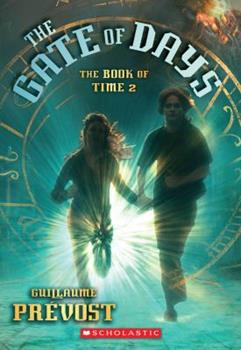 The Book of Time #2: The Gate of Days

Ancient Greek prophecies. Exploding volcanoes. Chicago gangsters. Just another day in the life for Sam Faulkner in this propulsive sequel to THE BOOK OF TIME Sam Faulkner now knows his father is trapped in Vlad Tepes's castle, but he can't save him without the seven coins that will allow him to direct his travel to the right year in Time. So he sets off on a desperate journey through the ages to collect the coins -- to the oracle at Delphi, Pompeii...

Even better the the first Book of Time!

Published by Thriftbooks.com User , 13 years ago
I became hooked on this trilogy series instantly and now will await the third book in September....This writer takes the reader back in time again and again and leaves you wanting more. Working in a K8 library I am constantly reading Juv. Fiction as to be able to give the kids some great reading ideas! This is for lovers of adventure and mystery. Adults and kids alike!

Published by Thriftbooks.com User , 13 years ago
I Really enjoyed this book, and the one that came before it. I can't wait for the next book in the trilogy! There is a lot to be learned from this series about other times and places even though it is fantasy.

Published by Thriftbooks.com User , 13 years ago
I bought this book for my daughter (11). She loved the first one and was very excited to receive this one for birthday. She is really enjoying this series.

More enjoyable than the original

Published by Thriftbooks.com User , 13 years ago
Sam Faulkner's life is unusual and complicated. His mother died in a car crash, and his father Allan has disappeared from their antique bookstore. While searching the store, Sam discovers a secret room with clues and messages that Allan is trapped in time --- in the year 1462 in Bran, the castle of Vlad Tepes, popularly known as Dracula. Through trial and error, Sam has figured out how to travel through time, but he cannot predict when, or where, he lands. These trips are taking their toll on him, and returning to the present is almost impossible to control. Even worse, explaining his long absences and devising excuses for the condition of his appearance after he comes back are proving to be more difficult and less believable. Sam lives with his grandparents, Aunt Evelyn and Cousin Lily. Because of Sam's behavior and his lengthy unexplained disappearances, Evelyn is convinced that Sam is on drugs and corrupting Lily. Evelyn warns Lily to stay away from Sam and, with the support of her boyfriend Rudolf, threatens to send him to a military school if he doesn't change his ways. But Lily stands by her cousin and even joins Sam on his quest to rescue his father. In THE GATE OF DAYS, Sam and Lily travel to a cave in prehistoric times, to the days of Roman slavery and the eruption of Mount Vesuvius and to Depression-era Chicago, where they meet a special relative and get help from some kind-hearted neighbors. They also encounter a travel guide along the way. But can he be trusted? And who is trying to prevent Sam from returning after his trips through time? In this sequel to THE BOOK OF TIME, the suspense and danger at home in the present and at the unpredictable destinations in the past build as Sam and Lily seek out their ultimate destination to rescue Sam's father. Because of the building tension and the character development of both young protagonists, I enjoyed Book II more than the original. Also appealing are the gentle history lessons Sam and Lily experience as they travel through time and meet famous and not-so-famous individuals. The ending has a twist that I didn't anticipate, and I look forward to following them on their adventures through time in Book III: THE GOLDEN CIRCLE. --- Reviewed by Donna Volkenannt (dvolkenannt@charter.net)
Write a review
Trustpilot