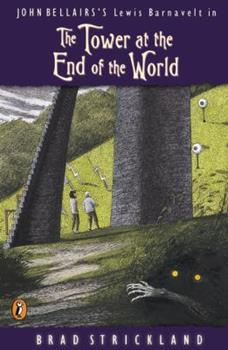 The Tower at the End of the World

(Book #9 in the Lewis Barnavelt Series)

When Lewis, his uncle Jonathan, and their friends Rose Rita Pottinger and Mrs. Zimmermann take a trip to a small town near Lake Superior, they expect a pleasant vacation. Instead, they find themselves facing the ghastly Ishmael Izard, son of the fiendish creator of the Doomsday Clock that was once hidden in the walls of Uncle Jonathan's house. Ishmael himself is a cruel and heartless sorcerer, and he is determined to wreak vengeance upon the entire...

Published by Thriftbooks.com User , 16 years ago
The reasons I like this book is the characterization where you have two different people who are friends named Rose Rita and Lewis. One is adventurous the other one isn't, one is athletic the other would rather eat chocolates and read books all summer. But this makes it a funny book even if it is a mystery. Another thing I liked about the Tower at the End of the World was that it was a mystery, an adventure, and a scary story all together which made it interesting. Also the imagery was very good because when it came to an action scene you felt as though you where there running from the hairy monster with yellow eyes or looking for the doomsday clock before it was too late. One quote I thought was exciting and scary was, "The creature suddenly reared, its arms spread wide in menace, its glowing yellow eyes flashing". The last thing I thought was great was the ending because it gave you a sense of relief. The world didn't blow up by the doomsday clock. Izard was killed (again) and everybody that was good survived. There are also follow ups for this book which I would highly recommend. It also could be turned into a scary movie but I don't think I would have the guts to watch it.

Back to the story of the first

Published by Thriftbooks.com User , 20 years ago
The latest John-Bellairs-esque offering from Brad Strickland goes back to Bellairs' first book. While it might be possible to read "Tower" without having read the first John Bellairs book, "House With A Clock In Its Walls," it is probable that newbies won't understand. So go read that book. Then come read this book. Lewis Barnavelt and Rose Rita Pottinger are romping around a lakeside with their friends and relatives, but things are not going to remain peaceful. Someone attacks Uncle Jonathan - but steals nothing valuable from the house. Lewis sees strange visions of impending death: a banshee, a Japanese specter with a huge toothy mouth, and a hairy beast with glowing eyes that is stalking him in his dreams and in his waking life. He also learns of a note that says he will die on a specified day. Unsurprisingly, Lewis is very freaked out by this.And on a boat trip out on a lake, our heroes encounter a strange, misty island with a giant black tower. And they find a new supernatural mystery that stems from their first adventure: the son of Isaac and Selenna Izard's son, Ishmael. And Ishmael is not only a sorcerer, but he fully intends to destroy the world.Strickland inserts the elements of Bellairs that we all love best: Evil wizards, sinister dreams, vague reasons to destroy the world, unabashedly sinister surroundings, things that appear and vanish without warning, hideous beasties, and evil magic that the good wizards wouldn't touch with a ten-foot wand. He also manages to harken back to "House" without overloading the reader with too much "this is how it happened," and manages to create a plot reminiscent of Bellairs' first book without repetition. Characterization is seamless; Lewis and Rose Rita are just as we remember them, as are the ever-bantering Mrs. Zimmerman and Uncle Jonathan. So is the writing style, which remains spare unless something sinister is happening. If something hideous rears its head, the writing becomes creepily descriptive. My beefs? Well, there are a few threads that feel... well, un-picked-up by the end. A little too loose. In addition, one of the final scenes is somehow a little cheesy and a little too cute.Few flaws aside, this is a wonderful spinechiller with a great climax, a deliciously BAAAAAD villain, and the quirky Bellairs heroes we know and love.

The Tower at the end of the World

Published by Thriftbooks.com User , 20 years ago
I like the book because in the middel of the book it gets intersting and makes me want to read more. Three reasons I like it is that the animals are abel to talk to some of the people in the book.There are wiches and beast near the tower. The best part of the book was when the to perasos had to go through all the trouble tring to get the book of someting.They also had to give the book to the witch becuse the some lizerd told them to do it. This book is great because you can like see the charecters in your mind. In a conflic you feel like your in the novel.

An Exciting New Adventure with Lewis and Rose Rita!

Published by Thriftbooks.com User , 21 years ago
For those of us who grew up reading John Bellairs' wonderful gothic mysteries, I think we were all saddened and aprehensive when Mr. Bellairs died and Brad Strickland began the task finishing his stories, and writing new ones based on Bellairs' characters and plot lines. I have to say that Mr. Strickland has done it! I was so impressed with the plot and development of the book that I think it rivals "The House with a Clock in its Walls". This is definitely one of the best adventures for Lewis and Rose Rita yet!!! I hope Brad Stickland will continue to develop and explore the wonderfully entertaining characters created by John Bellairs. I also really liked the new illustrator, and look forward to seeing more!

Published by Thriftbooks.com User , 21 years ago
Brad Strickland has done it again! In this book, The Tower at the End of the World, we become part of the exploits and adventures of Bellairs's first young adult character: Lewis Barnavelt. Of course, along with Lewis is his Wizard uncle, Jonathan Barnavelt, their Good Witch neighbor, Florence Zimmerman and Lewis's best friend, feisty Rose Rita Pottinger. "Bellairsian" purists will enjoy this book very much because, as the sub-title states, it is a sequel to The House with a Clock in its Walls. This book is also a great stand-alone adventure. The plot is straightforward: A sinister magician; the even-more-evil son of The House with a Clock in its Wall's principal villain, is bent on destruction and dominion, in that order. This book truly has it all. I can't begin to explain the pleasure in seeing these well recognized and endearing characters in a NEW story! Brad Strickland is firmly ingrained, in all the best possible ways, in the Bellairs universe. He doesn't try to re-write what's been established nor does he try to steer these stories away from what made them wonderful to start with. He's carried the flame without missing a single step. Also, my compliments to S. D. Schindler's cover. With the very sad passing of the legendary Edward Gorey, the cover art of the future Bellairs/Strickland books was in question. When I first saw the cover of this book, I breathed a long sigh of relief and, at the same time, marveled. Schindler did a nearly flawless job of honoring Gorey's style while adding his own personal touch. The one thing I would've liked to have seen is the quirky hand-written text that Gorey used for the books' titles. Still, I give this book the highest recommendations.
Write a review
Trustpilot