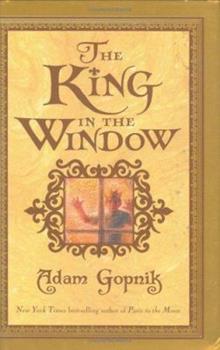 The King in the Window

Oliver Parker is a ten-year-old American boy miserably trapped in Paris, where his father is stationed as a journalist. Intimidated by his French school and its prickly teachers, oppressed by gray and wintry Paris, and feeling curiously remote from his father--who spends more and more time staring dully into his computer screen--Oliver longs to return to America.

Published by Thriftbooks.com User , 14 years ago
Started slowly, but got very interesting. Mildly scary and hard to read. -Eamon

Published by Thriftbooks.com User , 16 years ago
As delicious as a fresh pain au chocolat and cafe au lait! I quite enjoyed Mr. Gopnik's first book, as well as his work in The New Yorker. I was sucked right in to this book and finished it in several big gulps. I can see where some reviewers weren't completely enchanted, as I sometimes had the sense that this story was written to help his son through some difficult concepts at school. But I didn't find this distracting and it fit the hero's character. His friend from America is a bit broadly drawn, but again that helps the contrast between France and America with the hero as a bridge between societies, just as he bridges worlds through windows and mirrors. I'm a bit beyond the age group recommended for this book and my sons are still too little, but I think the book would be good for the kind of kids who like Narnia, Harry Potter, and Edward Eager. Happy reading!

Published by Thriftbooks.com User , 16 years ago
If you are looking for a travel memoir, this is not your book. However if you enjoy top notch fantasy , that is witty, literate, and may teach you a thing or two ; this book has it all. I enjoyed Paris to the Moon , but this is even better. Don't let the fact that this is a young adult book , hold you back. Well worth the read .

Published by Thriftbooks.com User , 16 years ago
This is a wonderful book. After a slightly rocky start, the reader is swept away at a furious pace. Though you may struggle to understand some of the ins and outs of the mirrors and windows the first time around, it doesn't matter because you will surely read it again. The characters are fully drawn and it is a pleasure to read a book by an author who so truly can inhabit his alternate universe. It is also a book filled with feeling, though based on the premise that is important to think. Five stars or should I say cinques étoiles.

Published by Thriftbooks.com User , 17 years ago
Written by Adam Gopnik, a New Yorker staff writer, THE KING IN THE WINDOW takes place in Paris. Its hero is Oliver Parker, a 12-year-old American boy living in Paris with his parents. But it is winter in Paris, a dark, gloomy, depressing season. And Oliver is not happy. He misses his friends, dislikes his French school, and is lonely. To make matters worse, his father is a busy journalist who is always slaving over his computer and has little time for Oliver. One night --- it happens to be Epiphany --- Oliver is staring out his kitchen window, wearing a gold paper crown that came with the Epiphany cake. Suddenly, another boy appears in the window's reflection; he is dressed in an old-fashioned doublet and calls Oliver "Your Majesty." Did I say this book has everything? You'll be whirled away in a fantastic flight of fact and fantasy. You'll learn important French vocabulary. You'll eat in a very fancy French restaurant and enjoy the most lavish French food. Along with Oliver, you'll meet Moliere and Racine and hear a discussion about the difference between a simile and a metaphor. You'll visit actual French sights, including Versailles. You'll even be part of a basic philosophy discussion. And above all, you'll enter the mystical world of the Window Wraiths and the Master of Mirrors as Oliver, armed with a glass sword and his little band of friends, go through the looking glass and enter the Mirror Maze in order to fight the Mirror Master and make the world safe for the Window Wraiths. Oliver's band includes a weird assortment of people. There's the imperious, elegant and witty Mrs. Pearson; Charlie, Oliver's friend from the States who is a wild, cutting-edge skateboarder; and there's even a touch of romance (after all, this is Paris) as we meet the beautiful Neige, who lives in Oliver's building and is much, much more than just a neighbor. THE KING IN THE WINDOW is historical and slightly hysterical. It veers from fact to fiction and from present to past. But it never stops being highly entertaining, enchanting and enthralling. --- Reviewed by Robert Oksner ([...])
Write a review
Trustpilot