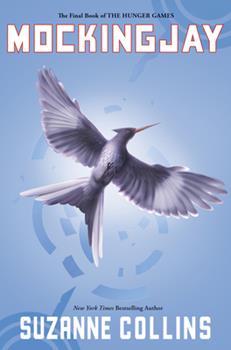 (Book #3 in the The Hunger Games Series)

The greatly anticipated final book in the New York Times bestselling Hunger Games trilogy by Suzanne Collins.The Capitol is angry. The Capitol wants revenge. Who do they think should pay for the unrest?Katniss Everdeen.The final book in The Hunger Games trilogy by Suzanne Collins will have hearts racing, pages turning, and everyone talking about one of the biggest and most talked-about books and authors in recent publishing history

Published by Dustie , 1 year ago
Wraps up the series, explains events better than the movie. For example, Katniss’ choice in life partner makes complete sense in the book where it’s a bit confusing in the movie.

Published by YSS , 1 year ago
I ordered the book in very good condition and the one I received looks like new. I haven't read it yet since I have some I have to read first, but I know I will love it since it's The Hunger Games.

Published by I***e , 2 years ago
I ordered an acceptable hardcover version of the book and the front cover had a sort of tear, otherwise the book is perfect. The only other complaint is that the book didn't have a dust jacket, but that was my fault for not paying attention. I love ordering from here and will keep doing so. just always make sure you know what you're ordering before you do so.

Published by isabella , 2 years ago
i believe i ordered very good” and it did indeed live up to that condition! i adore the hunger games series, so im happy i finally have all the books!

Published by Lydia mcvay , 2 years ago
I ordered the hardcover like new and it came in today. Took a while for shipping but was very cheap and it’s just as good quality as if I bought it brand new

Published by Kristin , 2 years ago
Great ending to a great series

Not the best quality

Published by Leah , 2 years ago
I ordered all three Hunger Games books at one time, with the first two books being “Very Good” condition and choosing Mockingjay as “Like New” condition. However, this “Like New” book was in much worse shape than either of the other two. The first page had a previous owner’s name written largely on it, there are yellow stains throughout, and a handful of pages are beginning to tear at the spine, despite getting no use from myself. I suppose I should have just stuck with the “Very Good” condition, because “Like New” doesn’t seem to be like new at all!

Published by F.B. Bryant , 3 years ago
Great condition for a preowned book.

Great ending to a great series

Published by Thriftbooks.com User , 6 years ago
Waaaay better than the movie. Exciting and emotional.

A powerful, unflinching look at the effects of war

Published by Thriftbooks.com User , 12 years ago
I've thoroughly enjoyed the unflinching, brutal first two books of the Hunger Games series, but even so, I don't think I was quite prepared for how good Mockingjay is, both as a conclusion to the series and a brilliant stand-alone work. Whereas The Hunger Games and Catching Fire touch on themes such as the effects of violence and conflict on the participants, Mockingjay goes a step further, making the explicit connection that's been there all along and making the theme crystal clear: this is a series about the horrors of war, and what it does to all of us, participant and bystander, foe and friend. Mockingjay isn't an easy book, and those expecting even the tense violence of the first two novels may not be prepared for the brutality and cruelty on display here. Indeed, many fans of the series are rebelling against the final book, resenting its pessimism and bleak worldview. It's not a feeling I sympathize with. What drew me to The Hunger Games in the first place was its honestly and unflinching nature, and Mockingjay is a logical conclusion to that process, as the long-brewing rebellion erupts into full civil war and lines are drawn. There's so much here that I loved - the eschewing of the "chosen one" syndrome among books like these, the refusal to pull punches, the time spent on scar tissue both physical and emotional, the questioning of motives - that I wish I had more people who had read it just so I could have a big roundtable discussion about it. Suffice to say, with Mockingjay, The Hunger Games trilogy becomes one of the best YA series I've had the pleasure to read, and one whose impact can't easily be shrugged away or forgotten. It's not an easy read, but it's an honest one, and that, to me, is what makes it so brilliant.

Published by Thriftbooks.com User , 12 years ago
Reread the last paragraph, then the epilogue. Then reread it again. Then again and again. You'll feel better.

Published by Thriftbooks.com User , 12 years ago
If The Hunger Games and Catching Fire are tales of a dystopia, then Mockingjay is a slight departure for the series. This final chapter in the trilogy is a war story. Panem is at war. The stakes for Katniss and the band of characters that we've grown to love (and sometimes hate) have never been higher. And while Suzanne Collins' work on this series has been masterful to date, she rises to the occasion to give her story the conclusion it deserves. As the novel opens, Katniss and hundreds of other refugees and revolutionaries have been taken in by the citizens of District 13. The rumors were true, but District 13 is both more and less than anything she could have envisioned. While safety is a fluid concept in Katniss's experience, she is what passes for safe at the moment. Still, she is tortured by thoughts of Peeta, being held prisoner in the Capitol. And she is tortured by too many ghosts. We're introduced to a somewhat more fragile Katniss in this novel, and she is not the only character in a somewhat diminished state. The events unfolding around them, as well as those of the past few years, have taken a heavy toll. It is in this final chapter that the surviving characters must wage a battle for the future of Panem. Ms. Collins has never shied away from depicting graphic violence and disturbing scenes, and this novel may be the most disturbing yet. For me, the life and death struggles that occur in a war resonate more painfully than a staged fight to the death. There's no denying that this is a dark tale. It is even more impressive, therefore, that Ms. Collins manages to infuse enough humor into the book to occasionally relieve the gloom, and to remind us why we love these characters in the first place. This third book is a departure in other ways. The pace of the story-telling wasn't quite as breathless. While still very much a thriller, in some ways Mockingjay allowed itself a bit more time to explore the emotional lives and constantly shifting relationships of the characters, as well as the full ramifications of the dangerous situations in which they found themselves. The emotional aspects of Katniss's tale have never been given short shrift, but there was a greater expansiveness here, perhaps owing to her increasing maturity. Of course, fans are waiting with bated breath to learn the outcome of the Katniss-Gale-Peeta love triangle. There is a resolution, one that seemed like the only possible outcome to me. The ending of the book is satisfying, not always happy, but deeply satisfying. Perhaps the best testament I can give Mockingjay is to tell you that this 41-year-old, responsible, gainfully-employed woman read it from cover to cover between 1:00AM and 7:00AM this morning. Not for one minute was I in danger of falling asleep. I think it's going to be a long time before a story inspires me to want to pull a stunt like that again.

Published by Thriftbooks.com User , 12 years ago
This was a brilliant conclusion to the trilogy. I can only compare it to "Ender's Game" - and that is extremely high praise, indeed. When I first closed the book last night, I felt shattered, empty, and drained. And that was the point, I think. I'm glad I waited to review the book because I'm not sure what my review would have been. For the first two books, I think most of us readers have all been laboring under the assumption that Katniss Everdeen would eventually choose one of the two terrific men in her life: Gale, her childhood companion or Peeta, the one who accompanied her to the Hunger Games twice. She'd pick one of them and live happily ever after with him, surrounded by friends and family. Somehow, along the way, Katniss would get rid of the awful President Snow and stop the evil Hunger Games. How one teenage girl would do all that, we weren't too sure, but we all had faith and hope that she would. "Mockingjay" relentlessly strips aside those feelings of faith and hope - much as District 13 must have done to Katniss. Katniss realizes that she is just as much a pawn for District 13 as she ever was for the Colony and that evil can exist in places outside of the Colony. And that's when the reader realizes that this will be a very different journey. And that maybe the first two books were a setup for a very different ride. That, at its heart, this wasn't a story about Katniss making her romantic decisions set against a backdrop of war. This is a story of war. And what it means to be a volunteer and yet still be a pawn. We have an entirely volunteer military now that is spread entirely too thin for the tasks we ask of it. The burden we place upon it is great. And at the end of the day, when the personal war is over for each of them, each is left alone to pick up the pieces as best he/she can. For some, like Peeta, it means hanging onto the back of a chair until the voices in his head stop and he's safe to be around again. Each copes in the best way he can. We ask - no, demand - incredible things of our men and women in arms, and then relegate them to the sidelines afterwards because we don't want to be reminded of the things they did in battle. What do you do with people who are trained to kill when they come back home? And what if there's no real home to come back to - if, heaven forbid, the war is fought in your own home? We need our soldiers when we need them, but they make us uncomfortable when the fighting stops. All of that is bigger than a love story - than Peeta or Gale. And yet, Katniss' war does come to an end. And she does have to pick up the pieces of her life and figure out where to go at the end. So she does make a choice. But compared to the tragedy of everything that comes before it, it doesn't seem "enough". And I think that's the point. That once you've been to hell and lost so much, your life will never be the same. Katniss will never be the same. For a large part of this book, we s
Write a review

Mockingjay Mentions in Our Blog

Suzanne Collins captured the world’s attention with her blockbuster Hunger Games trilogy. Now she’s back with a prequel to the thrilling saga. Here, we tell you a bit about about the author, her background, her inspirations, and her favorite books.