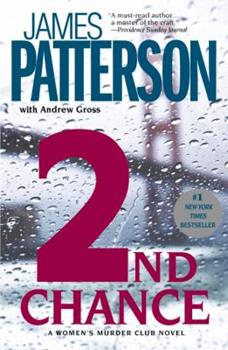 by James Patterson and Andrew Gross

The Women's Murder Club returns for another thrilling crime investigation. Will their skills be enough to take down a brutal madman? A brutal madman sprays bullets into a crowd of children leaving a San Francisco church. Miraculously-or was it intentionally?-only one person dies. Then an elderly black woman is hung. Police homicide inspector Lindsay Boxer senses a connection and together with medical examiner Claire, assistant D. A. Jill, and Chronicle...

Published by Thriftbooks.com User , 19 years ago
James Patterson does it again. If you're looking for a really great, fast-paced, fast-read mystery, then you definitly should read this book. "First to Die" was the first in the Women's Murder Club mysteries. I really loved it! This one didn't disappoint me either. "2nd Chance" is as good as the first. You can read it in one day!

patterson is back and better!

Published by Thriftbooks.com User , 20 years ago
What a pleasure to read the "old"Patterson who left Alex Cross behind and moved to San Fransico with new characters. I haven't read the first book in this seriesbut he picks up with fast action in the beginning and carries it right up to the end. The four women involved in solving the crimes are belivable and interact well. Why Patterson calls them The Women's Murder Club doesn't click in with their purpose.But the characters' skills blend in to solve murders. The DA, newsreporter, medical examiner and police detective make use of theirknowledge and work toward a commongoal...catch the killer. This time the killer is targeting the police detective in his list of victims. I had given up on Patterson after "Roses are Red" but now I'm back to reading his books again. A page turner that keeps you guessing, I say "Well done and welcome back, Mr. Patterson!"

He's back in the saddle again!

Published by Thriftbooks.com User , 20 years ago
If you're looking for great fiction, don't read JamesPatterson. If you're looking for a fast-paced, fast-readmystery, then you might want to pick up this book. "Firstto Die" was the first in the Women's Murder Club mysteries.Loved it! This one didn't disappoint me. The premise ofa homicide detective, D.A., coroner, and news writer combining their talents and intellect to solve a mystery is quite innovative. "2nd Chance" begins with a murder that might beviewed as a hate crime. However, with the help of her bestfriend the coroner, Lindsey the detective sees another pattern forming. Another killing that leads in a totally different direction. Then, just when you think you know the outcome...yikes! there are still 70 pages to go. Lindsey's dad returns after a 20 year hiatus. Sympathize or suspectWhile I love those books that I can savor over a week's time,I also love those I can't put down until I finish it the sameday. Patterson is a same day read...

2nd Is Even Better Than The 1st

Published by Thriftbooks.com User , 20 years ago
The second installment in the Women's Murder Club series is a fast-paced page-turner. Even better than 1st To Die (and that is saying something), it is full of clever plot twists that will keep you off balance until the end. In this installment, we get to know Lindsay (now Lt. Boxer) and the other women better and learn more about their personal lives, while going along on this exciting and sometimes nerve-wracking serial killer investigation.Another very entertaining read from Mr. Patterson. Can't wait for the 3rd in the series!

Much Better than Violets are Blue

Published by Thriftbooks.com User , 20 years ago
I was beginning to worry about James Patterson. After a few great books early on in the Alex Cross series, the quality of his work had started to drop off significantly. It looks now, however, that he has turned his efforts to writing about the Women's Murder Club. Is he getting tired of writing Alex Cross? Tough to tell. One thing is certain - 2nd Chance is a fine read.The plot of the novel is similar to that of 1st to Die. Of course, there is a different killer, different murders, and different methods, but the basis of the book remains the same - 4 women - a cop, an assistant D.A., a medical examiner, and a reproter - get together to solve a series of killings that seemingly no one else can. The differing professions of the women allow Patterson to bring detail to the reader that would otherwise be tough to introduce. For example, Claire, the M.E., discovers that one of the victims has tattooed skin under her nails. Each character brings their own talents and insights to the investigation.Another glaring difference frequent Patterson readers will notice about 2nd Chance is that the author is much more attentive to character development in this series than he has been with the Alex Cross series. Each character has personality strengeths and flaws and Patterson illustraits them in detail. One deals with a pregnancy while Cindy becomes involved with a minister. By allowing the reader to feel personally connected with his characters, Patterson only makes the story that much more exciting.Highly recommended to anyone who liked 1st to Die or books from the Alex Cross series.
Write a review
Trustpilot