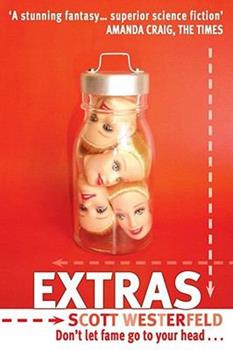 (Book #4 in the Uglies Series)

The final installment of Scott Westerfeld's New York Times bestselling and award-winning Uglies series--a global phenomenon that started the dystopian trend. A few years after rebel Tally Youngblood... This description may be from another edition of this product.

Published by Thriftbooks.com User , 15 years ago
As a huge fan of the original Uglies trilogy, I was excited about this book, although I was also a bit apprehensive. This book doesn't follow the same storyline as the others do. There are all new problems, and Tally isn't the main character. Still, I found that this book was just as interesting and intriguing as the others. I still prefer the first three, and I still think Tally made a better main character than Aya, but this didn't disappoint.

LOVED this fourth in the "trilogy"!

Published by Thriftbooks.com User , 15 years ago
I thought the series was finished when Tally Youngblood ended the prettytime and spurred on the changes that allowed everyone to think independently again. But I enjoyed the trilogy so much that I was more than ready for another look into the world. A few years after Tally and The Cutters brought the mind-rain and ended prettytime, Aya Fuse is a normal ugly teen, too young for the optional brain, face, and body surge(ry) that most people choose to have, and too unimportant to do anything exciting. Her city uses a reputation economy, based on face-rank - the people who are the most important, well-known, and interesting get to do and have the most exciting things. Everyone has their own feed in an attempt to gain a higher face-rank, and Aya's greatest hope for fame is as a kicker, someone who finds and reports on the best stories in their world. When she meets a group of dare-devil girls who aim to stay unknown, she knows that kicking their story is her chance to make her name. But when they all find some mysterious things in a nearby mountain, the story becomes bigger than Aya could have imagined - big enough to involve the person with the biggest face-rank - Tally Youngblood. Like all of Westerfeld's books, this one swiftly takes you into a world so different and yet so realistic that you can't help but feel a bit disoriented when you finally set the book down. This was an excellent and enjoyable read, and I hope Westerfeld will write more in this series.

Published by Thriftbooks.com User , 15 years ago
Extras is the fourth book in Scott Westerfeld's critically acclaimed, New York Times bestselling series (originally it was a trilogy). The first three books Uglies, Pretties, and Specials follow Tally Youngblood, a fifteen-year-old girl living in a futuristic world so dominated by plastic surgery that anyone who looks normal is ugly. Extras is set three years after the events of the trilogy unfold, in a different city, with different main characters. The trilogy, however, sets the framework for everything that happens in Extras so while the book is great on its own it definitely assumes you know the story of the trilogy. In this new world, where everything is changing, being pretty isn't enough to get by. Now it's fame that matters. The more famous you are, the higher your face rank is. A higher rank means more currency in a world where celebrity is everything. Everyone is trying to get more attention somehow: "tech-heads" are obsessed with gadgets, "surge monkeys" are hooked on the newest trends in plastic surgery, and "kickers" use feeds (think blogs but techier and cooler because it's a Westerfeld idea) to spread the word on all the gossip and trends worth mentioning. But staying famous is a lot easier than getting famous. Just ask Aya Fuse. Fifteen-year-old Aya has had her own feed for a year, but her rank is still 451,369--so low that she's a definite nobody, someone her city calls an extra. Aya has a plan to up her rank though. All she needs is a really big story to kick. Aya finds the perfect story when she meets the Sly Girls, a clique pulling crazy tricks in utter obscurity. As Aya follows her story she realizes it's much bigger than one clique: maybe the biggest story since Tally Youngblood changed everything. Some sequels that bring in all new characters are annoying. Not this one. All of the "new" characters are original and, equally important, likable. The story is also utterly original covering very different territory than the rest of the series. It doesn't pick up right where the trilogy left off, but a lot of questions are answered by the end of this book. Like the other books in the series, this one moves fast. The story has a lot of action and several twists and surprises (some old characters even turn up). The plot is never overly-confusing though. Westerfeld does a great job of creating (and explaining) the futuristic world he has created in these pages so that it truly comes to life on the page. At the same time, Extras is a very timely book. In a world where everyone seems to have some kind of website and is trying to be more popular or more famous, it's fascinating to read about a city where everything literally depends on your reputation. Westerfeld raises a lot of interesting questions as Aya deals with the ethics of kicking her new story and tries to decide if honesty really is more important than fame.

Published by Thriftbooks.com User , 15 years ago
This book was amazing!! I was a little hesitant when I heard it wasn't about Tally, but it definitely exceeded my expectations. The characters are well written and likable. You find yourself falling into the story, and you cannot put it down until you turn that final page. The end left me yearning for more and I really hope he writes another.

My favorite of the series

Published by Thriftbooks.com User , 15 years ago
I was lucky enough to get to read an advance copy of this book (and meet the author) this past weekend. I loved the book! I think it's my favorite of the series, mainly because it relates so clearly to our culture's desire for fame. But I think the world-building is fantastic in all of the books and I was excited to return to that world for this fourth visit. I also enjoyed getting a perspective other than Tally's as well as seeing Tally from someone else's eyes. Aya is terrific, young and prone to making mistakes but trying to do the right thing. : ) A commendable heroine!
Write a review

Extras Mentions in Our Blog

You know that feeling of heart-stopping embarrassment you get when you come across a photo of yourself from years ago? It's a universal 'oh-my-god-I-can't-believe-I-thought-that-was-cool' moment, and we've all been there. Puberty can a time of questionable stylistic choices and a deluded state of believed independence. I for one thought it would be a fabulous idea to cut off my butt-length brown tresses in favor of a bleach blonde pixie cut sometime in the middle of my sophomore year of high school. Of course it was a terrible idea, and I was left with five awkward years of grow out and dye jobs, and a really unfortunate driver's license until I turned 21.